Magistrate Judge William Hussmann put a new spin on form of production analysis in Crissen v. Gupta: What form was discovery in and when was it in that form? 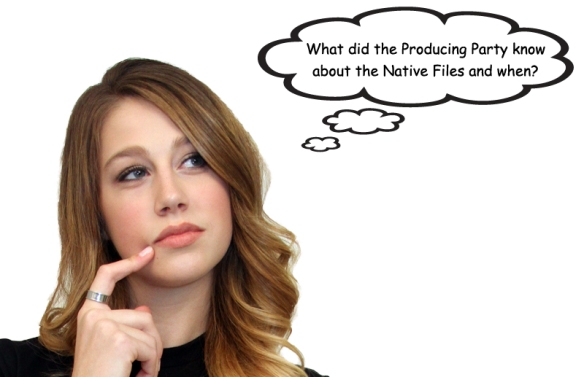 The Plaintiff brought a motion for the production of Word documents in native file format. The Producing Party had produced the files as non-searchable PDF’s. The Plaintiff argued the PDF’s lacked the metadata that showed who created the Word documents, revisions and when the files were printed. Crissen v. Gupta, 2013 U.S. Dist. LEXIS 159534, at *20 (S.D. Ind. Nov. 7, 2013).

The Producing Party countered that the Plaintiff did not state the form of production in their request and that they did not have to produce ESI in more than one form pursuant to Federal Rule of Civil Procedure 34(b)(2)(E)(iii).  Crissen at *20-21.

The Court explained the Producing Party was partially correct in their reading of Rule 34. However, the “full story” of Rule 34 states  that “[a] party must produce documents as they are kept in the usual course of business” and that, “[i]f a request does not specify a form for producing electronically stored information, a party must produce it in a form or forms in which it is ordinarily maintained or in a reasonably usable form or forms.” Crissen at *21, citing Fed. R. Civ. P. 34(b)(2)(E)(i), (ii).

The Court further cited to the Advisory Committee notes, which states:

Driving the point home, the Court explained that a requesting party’s obligation to specify a format for production is superseded by a responding party’s obligation to refrain from converting “any of its electronically stored information to a different format that would make it more difficult or burdensome for [the requesting party] to use.” Crissen at *22, referencing Craig & Landreth, Inc. v. Mazda Motor of America, Inc., 2009 U.S. Dist. LEXIS 66069, at *3 (S.D. Ind. July 27, 2009).

This is where things took an usual turn: The Court did not know from the record whether the Producing Party had the responsive discovery in native file format. Crissen at *23.

It is assumed a producing party has discovery in its native application. There can be exceptions to this assumption. For example, one party to a contract might only have the final version of the contract as a non-searchable PDF. Even then, the PDF’s would likely be an attachment to an email message.

It is highly unlikely a business is converting all business related ESI to PDFs and then destroying the native files as part of a data retention policy. It is conceptually possible, but extremely unlikely anyone would do business like that.